Aoi Kaguragi (, Kaguragi Aoi) is a young member of the Third Division of the Defense Force.[4] After the destruction of Tachikawa Base,[5] he was transferred to the Second Division.[1]

Aoi is a tall muscular young man with tanned skin, spiky short white hair, and a noticeable lack of eyebrows. He usually sports a serious look on his face.[2]

On duty, Aoi wears the Defense Force uniform as well as its combat suit on the battlefield.[2]

Aoi has a very serious demeanor, always doing his best to be on top and better than his peers and doing what he must to grow stronger and surpassing others.[2] Despite his sometimes cold character, he hides a lot more of his emotions then he kets out.[3] As a metter of fact, due to his proud personality, he shares a rivalry with Haruichi Izumo, another very capable trainee.[6]

Aoi was a rising star at Japan Ground Self-Defense Force, but turned down his future in the JGSDF to apply to the Defense Force.[2]

Aoi took on the second-stage exam for the Defense Force. He arrived first in the fitness test, but despite that kept his eyes on Kikoru Shinomiya.[2]

For the aptitude test, he managed to draw 15% from the Defense Force Suit,[7] however during the test he was unable to keep up with Kikoru.[8] After the end of the exam and the subsequent accident, he and the other examinees were brought to safety.[9] Days later he was officially made a member of the Defense Force.[4]

Two months after he and the others had the shooting training and Aoi, after unlocking 25% of his suit power, told Haruichi that he caught up to his force. That night he and the other boys were in the bathroom talking about their reasons to enter the Defense Force. When he and the others heard that Kafka Hibino had a history with Captain Mina Ashiro they talked about it so much that they overheated and fainted. That night a kaiju appeared and their first mission started.[6] He and Haruichi quickly demonstrated their incredible ability in the field to their platoon leader Nakanoshima.[10] Then he and Haruichi got ready to defeat all the Yoju after the Honju's death.[11]

During the raid Aoi, Izumo and Ikaruga fought the Wyvern-type kaiju under Kafka's instructions. As Aoi and Izumo were about to kill a kaiju they were saved by Kikoru's surprise ax attack.[12] He later witnessed as Kafka Hibino transformed into Kaiju No. 8 to save everyone from a Yoju-bomb.[13]

When Kafka was captured and brought away,[14] Aoi and the others were offered a place in another division since Tachikawa Base was mostly destroyed. After Leno decided to accept, Aoi followed him hoping to become stronger.[5]

At some point, Aoi and Haruichi were transferred to the Second Division.[1]

After Director General Isao Shinomiya's death at the hands of Kaiju No. 9, Aoi and Haruichi payed homage to him with the rest of their division.[1]

Months later, Aoi and Haruichi found out Leno became the first compatible person in history with Kaiju No. 6's weapon.[15]

Overall Abilities: Aoi was a rising star at the Ground SDF's and is a strong promising Defense Force troop member. He is very strong physically and came in first in the fitness test.[2] On the battlefield, Aoi is easily able to aid his peers through their fights against kaiju.[10][12] 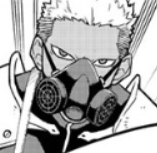