Edit
watch 01:40
The Sandman Will Keep You Awake - The Loop
Do you like this video?
Play Sound

The Japan Anti-Kaiju Defense Force (日本防衛隊, Nihon Bōei-tai)[4] or simply known as Defense Force,[5] is a military organization specialized in taking down and neutralizing kaiju.[5] It has various bases all around Japan.[6] The Defense Force is governed by the Neutralization Bureau.[7]

Ever since its creation, the Defense Force has neutralized every kaiju appeared on the scene to threaten humanity.[6]

Ten years ago, the Defense Force fought a series of cataclysms involving Kaiju No. 6. The casualties counted 200 officers and 3 Captains losing their lives, along with Director General Shinomiya's wife. Ever since that event, the Defense Force struggles to prepare its ranks for the next cataclysm event.[8]

To join the Defense Force candidates must pass a First-Stage Examination which consists of filling in some documents.[6]

The second part of the exam is a two-part system, consisting of a physical test and an aptitude test.[9] While the first one involves regular military physical training, the aptitude test changes every year and it's the real test of one's natural ability. The test can either be Kaiju Disposal or Kaiju Neutralization.[9]

Candidates who passed the exam receive their results days later and take part in the Presentation of Enlistment Certificate where they are presented as official Force members and vow to give their life to the Force.[10]

Members of the Defense Force are differentiated through ranks. The ranks represent the militants' status within the corps.

The Defense Force's ranks are as follows:

The normal equipment of the Defense Force

The members of the Defense Force possess a huge variety of equipment, with the most important item being the suit itself, equipped with a gas mask and a fair amount of utilities.[12] Most of the equipment and the weapons owned by the Defense Force are made by Izumo Tech, the biggest anti-kaiju weapon manufacturer in Japan.[14] The arsenal of most of the members consists of rifles, guns, combat knives and various kinds of bullets.

The standard uniform of the Defense Force

The first formal uniform of the Defense Force 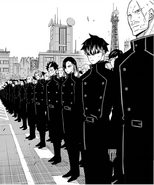 The second formal uniform of the Defense Force

The combat suit used by members of the Defense Force, provided by Izumo Tech and sporting its logo along with that of the Neutralization Bureau,[14] is a bioweapon made of kaiju cells and muscle fibers.[17] Depending on the force released by every user, it accordingly augments the wearer's physical attributes like strength, speed, precision, and reflexes.[17] The suit itself is of jet-black color with various armored guards; green on the chest, knees and for the pockets and silver on the shoulders, waist, wrists, boots and on the metallic spine-like armor on the back.[12]

An abuse or extented use of the combat suit's power can cause overheat, injuring its wearer and causing physical pain to the point of making them bleed due to exhaustion.[18]

The combat suit of the Defense Force

Due to them being the strongest combatants within the Defense Force, the captains and vice-captains are given customized weapons to suit their personal fighting styles. An officer with exceptional combat skills may also be given a personal weapon.[26]

Some of these weapons include.

The corpse of an extremely powerful kaiju, usually the numbered ones, are disposed of and turned into weapons known as Numbers (, Nanbāzu, lit. "Identification Monster Weapon").[29][11] Provided by Izumo Tech, these weapons keep the abilities and strength of a kaiju when it was alive and are strong enough to seriously damage or kill daikaiju-class monsters; however the user must be compatible with them to use them properly.[30] When using the full released force of a Numbers weapon, the user gains a level of power equal to a daikaiju.[31]

When users of Numbers Weapons sync with the energy and cells of a daikaiju, it triggers stimulation in their brains and causes an abnormal spike in neurotransmitter level and trasmittion rate.[32] As a result, the user's basic human desire and nature come to surface and, depending on their personality, the impulse is so strong to risk injuries in the user's body.[32] Repeated usage of a Numbers weapon costs a lot of strain on the users body and shaves years off their life that could ultimately be fatal.[33]

Some of these weapons include.