Haruichi Izumo (ハルイチ, Izumo Haruichi) is a wealthy young man and a prominent member of the Third Division of the Defense Force.[3] After the destruction of Tachikawa Base,[4] he was transferred to the Second Division.[1] Haruichi is also the scion of Izumo Tech.[5]

Haruichi is a tall young man with medium-length blue hair and thin eyebrows. He has big eyes and usually sports a relaxed expression on his face.[3]

On duty he wears the usual Defense Force uniform, as well as its combat suit when fighting.[6]

Haruichi is usually a relaxed boy, with a observant and cunning personality.[3] Due to this, Haruichi tends to be more level-headed than his peers and prefers to watch the others be rowdy from the sidelines, rather than being mixed in the chaos himself.[2]

He always measures himself with those who do better than him and does whatever he can to surpass them, bringing this to a secret one-sided rivalry with Kikoru Shinomiya[4] and an open rivalry with Aoi Kaguragi.[7]

Haruichi took on the second-stage exam for the Defense Force. He finished second in the fitness test, but kept his eyes on Kikoru Shinomiya, wondering how he would fare against her.[3]

For the aptitude test, he managed to draw 18% from the Defense Force Suit,[6] however during the test he was unable to keep up with Kikoru.[8] After the end of the exam and the subsequent accident, he and the other examinees were brought to security.[9] Days later he was officially made a member of the Defense Force.[10]

Two months after he and the others had the shooting training and Haruichi improved his power. That night he and the other boys were in the bathroom talking about their reasons to enter the Defense Force. When he and the others heard that Kafka Hibino had a history with Captain Mina Ashiro they talked about it so much that they overheated and fainted. That night a kaiju appeared and their first mission started.[7] He and Aoi quickly demonstrated their incredible fighting ability to their platoon leader Nakanoshima.[11] Then he and Aoi got ready to defeat all the Yoju after the Honju's death.[12]

During the raid, Izumo, Aoi, and Ikaruga fought the Wyvern-type kaiju under Kafka's instructions. As he and Aoi were about to kill a kaiju, another one attacked Izumo before he was saved by Kikoru's surprise ax attack.[13] He later witnessed as Kafka Hibino transformed into Kaiju No. 8 to save everyone from a Yoju-bomb.[14]

After Kafka was taken into custody,[15] Haruichi and the others were asked to transfer to another division since Tachikawa Base was mostly taken down during the attack. Watching the others accept, Haruichi followed them, hoping to surpass Kikoru.[4]

At some point, Haruichi and Aoi were transferred to the Second Division.[1]

After Director General Isao Shinomiya's death at the hands of Kaiju No. 9, Haruichi and Aoi payed homage to him with the rest of their division.[1]

Months later, Haruichi and Aoi found out Leno became the first compatible person in history with Kaiju No. 6's weapon.[16]

Overall Abilities: Haruichi is a promising Defense Force member and is very skilled in academics being a valedictorian graduated from Tokyo Neutralization University.[6][3] 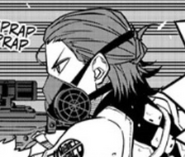 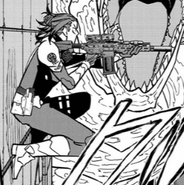