"I...was never a prodigy. The role of a hero was never mine to take on. And I'm sure this path will lead me to the same old wall again. I'll hit it...and hit it... and keep on hitting it! Mark my words. I'll make it there too. Just go on ahead and wait for me!!"
— Iharu's resolution to Leno Ichikawa.[3]

Iharu Furuhashi (, Furuhashi Iharu) is a young officer of the Third Division of the Defense Force.[4] After the destruction of Tachikawa Base, he was transferred to the Fourth Division.

Iharu is a tall athletic-looking young man with messy pink hair shaved on the side, orange eyes and sharp teeth.[4]

In battle, Iharu wears the usual combat suit of the Defense Force,[5] as well as the usual uniform when on duty.

Iharu is an hot-blooded and proud individual who doesn't like to be inferior to other people or losing, and constantly tries to improve more than those he deems stronger than him.[6] For this reason, he targeted Leno Ichikawa, bragging with him whenever he has the chance to do so.[6] Iharu is described as an headstrong character who brightens up every environment he's in.[2]

Despite his apparently confident attitude, Iharu hides a big inferiority complex towards his peers, mostly due to his past life of success which he now compares to his current life in the Defense Force, where most of his collegues improve faster than him.[7] As a matter of fact, when pushed into difficult and life-threatening situations, Iharu displays a more fragile and insecure side, being aware of his own weaknesses and even admiring someone stronger than him like Leno himself.[8] Deep down, he values his own team and teammates more than he would admit.[3] Nevertheless, he's shown to be determined and a very stubborn, refusing to give up and facing evey wall in his path to improve himself.[3]

Back when Iharu was still in middle school, he was saved from a kaiju by Mina Ashiro. This event would later inspire him to become a Defense Force member.[6].

while attending Hachioji Neutralization Technical College, Iharu'd always been the top of his class, having the best score in every test, being the best at sports and mostly in everything, quickly becoming popular and admired by his classmates. This made Iharu believe he could become the best in anything he wanted developing an overinflated ego.[7] He later graduated valedictorian.[4]

Iharu took on the second-stage exam for the Defense Force. He finished third in the fitness test, but kept his eyes on Kikoru Shinomiya, having the desire to crush her.[4]

For the aptitude test, he managed to draw 14% from the Defense Force Suit,[5] however during the test he was unable to keep up with Kikoru.[9] After the end of the exam and the subsequent accident, he and the other examinees were brought to security.[10] Days later he was officially made a member of the Defense Force.[11]

Two months after he and the others had the shooting training Iharu was able to draw 20% of his suit. He quickly went to boast about it with Leno. That night he and the other boys were in the bathroom talking about their reasons to enter the Defense Force. When he and the others heard that Kafka Hibino had a history with Captain Mina Ashiro they talked about it so much that they overheated and fainted. That night a kaiju appeared and their first mission started.[6] During the mission, dispatched in Ikaruga Platoon,[12] Iharu was left speechless by Leno's incredible fighting prowess and improvement.[13] After the Honju's death, a great number of Yoju rushed towards the Defense Force and while Iharu and Leno were facing them they encounter a strange disposal crew member.[14] As the crew member was revealed to be the kaiju who injured Kikoru, Leno and Iharu engaged in combat with him. Upon getting injured Iharu was asked by Leno to run away and call the cavalry.[15] As Iharu was running away the remorse of always being protected, from Mina Ashiro in his past and from Leno now, and not improving as Leno did get the best of him and, despite his injuries, came back to save Leno's life and aid him fighting the kaiju. As Leno was able to put the kaiju down the latter emerged from a barrage of corpses, ready to fight again.[16] Iharu was then incapacitated but tried his best to prevent the kaiju from killing Leno. As he realized that he had no chance to save him, Iharu prayed for his friend's life before Kaiju No. 8 appeared and saved Leno from the Humanoid Kaiju, who got decapitated with one fist, much to Iharu's shock.[8] He could only watch as the battle between the kaiju went on until the Defense Force arrived.[17]

After waking up in the hospital two weeks later he and Leno were discharged and celebrated along with the other Corps members their first mission. During the party, he discussed the mission with his peers. As they were all discussing the mission he watched as Soshiro announced Kafka's promotion to Corps member of the Third Division of the Defense Force.[18]

During the raid, Iharu and Leno helped the Defense Force to deal with the Wyvern-type kaiju.[19] He later witnessed as Kafka Hibino transformed into Kaiju No. 8 to save everyone from a Yoju-bomb.[20]

After Kafka was taken into custody by the Defense Force,[21] Iharu couldn't help but feeling shocked by the news.[22] Then, he and the others were asked by Mina herself to transfer to another division, since Tachikawa Base was mostly destroyed. Despite being initially reluctant, Iharu accepted to prove Leno that he wouldn't lose to him.[22]

At some point, Iharu and Leno were transferred to the Fourth Division.[23]

After Director General Isao Shinomiya's death at the hand of Kaiju No. 9, Iharu and Leno payed hamge to him with the rest of their division.[24]

When Leno was selected to become the user of Numbers Weapon 6, crafted from Kaiju No. 6's corpse, Iharu witnessed his compatibility test.[25] One month later, he aided Leno and the rest of the Fourth Division in a test to measure Leno's ability with the suit.[26] During the battle Iharu was repeatedly saved by Leno and, after lamenting his inability to improve like his peers, he witnessed as Leno started abusing his power out of control[7]. In the climax, Leno fought while injuring his own body in order to beat the Honju and froze an entire area just to avoid getting external help. As Captain Jugo Ogata was ready to step in and declare Leno's failure, Iharu rushed towards his friend begging his captain to still give him a chance. Breaking through the ice, he reaced Leno and encouraged him to go on and fight.[27] After carrying Leno on his back to safety and preparing a plan, Iharu used his spiking released force to expose the kaiju's core to give Leno the opportunity to kill it.[3] After they managed to complete the mission, Iharu and Leno celebrated and were brought to the infirmatory.[1]

Overall Abilities: Iharu is a strong young officer within the Defense Force, easily proving to be one of the best rookies of his year. Before joining the Defense Force, he ranked number one in his class constantly, being the strongest of his peers.[7] In battle, Iharu is skilled and determinated enough to follow the likes of Leno Ichikawa and provide him support even against major threats like Kaiju No. 9. He was even likened to a division captain of Jugo Ogata's caliber, due to his innate abilities with his suit.[1]

Release Force: Iharu was initially able to release 14% of his combat suit's power and later 20% after two months.[5][6] Iharu's current stable released force is 24%, allowing him to keep up with Leno and easily break big chunks of ice.[27]

However, Iharu's released suit power reaches remarkable spikes when he's engaging an enemy, going from a mere 24% to a full 42% in seconds, even unpredictably fluctuating back and forth.[1] According to Captain Ogata, who even likened Iharu to himself, Iharu's released power is on par with Ichikawa and he has potential to become a great soldier.[1] 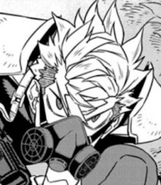 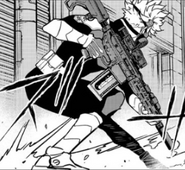