Kaiju No. 8 Wiki
Register
Don't have an account?
Sign In
Advertisement
in: Subpages, Characters, Female,
and 4 more

"No casualties or dropouts allowed. At least, not on any battlefield where I set foot!"
— Kikoru during the Secondary Selection Exam

She is the young daughter of Defense Force Director General Isao Shinomiya and a member of the Third Division.[3] After Tachikawa Base was destroyed,[4] Kikoru was transferred to the First Division.[5]

Kikoru is a petite young girl with long blonde hair styled in two ponytails on the sides, decorated with two black bows, and big green eyes. She is fairly short and possesses a rather skinny yet athletic physique.[2] Considering her overall appearance and her hairstyle, she resembles her mother Hikari Shinomiya very much.[6]

On duty, Kikoru wears the usual combat suit of the Defense Force along with her usual arsenal.[7] Her casual attire consists of a long grey dress.[2]

When Kikoru was a child, she had slightly shorter hair with the same hairstyle as today.[8] 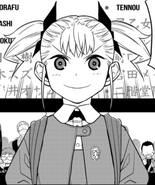 Kikoru appears as an arrogant and prideful girl,[2] very confident in her ability to look down on people and humiliate those she deems inferior without second thought.[3][9] Kikoru is also a very persistent and determined person, working hard to constanly improve herself and becoming stronger and more useful whenever she can. Even towards superior officers, she still manages to show her confidence, although in a much more polite and less arrogant way.

Despite this more evident trait, Kikoru deep down cares about her comrades and does whatever in her power to avoid casualties or injuries whenever she's on the battlefield. She is also a loyal person, showing gratitude towards Kafka Hibino for saving her, and keeping his secret. Even if it's hidden by her proud and unafraid nature, she cares for her allies well-being and goes as far as needed to ensure their safety or simply to support them.

It is revealed that Kikoru used to be very fond of her parents' work as Defense Force members, and this brought her to desire to join the Force herself. However, every since her mother's death, Kikoru grew a hidden yet large sense of insecurity that brought her to push herself to get stronger and stronger, in order to keep the promise made to Hikari. This, in tandem with Isao's overly high expectations on Kikoru, cause her to constantly feel the need to get stronger to avoid the death of anyone around her. Her relationship with her father and everything regarding her family as a whole seem to make her insecure and hesitant, easily breaking down in despair. This feelings obviosuly increased ever since Isao's death too, with her wishing to get stronger again due to living the same trauma twice.

Kikoru appears to be very polite and professional when speaking to higher ups and superiors, being probably used to speaking to military officers due to her upbringing.

Overall Abilities: Kikoru is the daughter of director general Isao Shinomiya and a prodigious talent. Due to her being ranked third in terms of power, she is given her own personal weapon which is only giving to captains and vice-captains.[10] Keiji Itami states that Kikoru has improved very much and watching her on the battlefield reminds him of her mother, former Captain of the Second Division of the Defense Force, Hikari Shinomiya.[6]

After receiving a battle axe from the Defense Force, befitting her aggressive and high-handed personality, Kikoru displayed a remarkable mastery in the Squadron-Style Axe Technique (隊式斧術, Tai-shiki Ono-jutsu).[10] She uses this combat style for close-range battles and her proficiency gives her enough power to easily defeat durable kaiju[10] and injure kaiju as powerful as Kaiju No. 10, although drastically consuming her stamina and energy.[14] 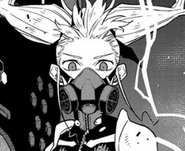 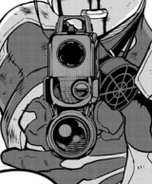 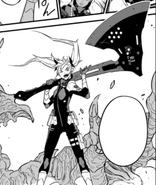