Kaiju No. 8 Wiki
Register
Don't have an account?
Sign In
Advertisement
in: Subpages, Characters, Male,
and 4 more

"But the kind of officer I strive to be is one who can lay his life on the line to protect one of his own at a time like this!!"
— Leno, determined to protect Iharu Furuhashi against Kaiju No. 9

Leno Ichikawa (レノ, Ichikawa Reno) is the deuteragonist of the Kaiju No. 8 series.

He briefly worked at Monster Sweeper Inc. where he met and befriended Kafka Hibino.[1] After witnessing Kafka's transformation, Leno helped him enter the Defense Force and joined with him.[3][4] He was a member of the Third Division and after destruction of Tachikawa Base he was transferred to the Fourth Division.[5]

Leno is a tall, slender young man with short silver hair and big violet eyes. He usually shows a neutral unfazed look on his face, but this expression usually changes to exasperation or incredulity when around Kafka.

Earlier in the series, Leno wore the usual Defense Force combat suit when on the battlefield. Leno's new combat suit is unique compared to the regular combat suit's worn by other Defense Force members, being the Numbers Weapon forged from Kaiju No. 6's corpse. It is a dark-blue armory suit with pipes and pistons on the back and shoulders and the Izumo Tech logo on the left side of the chest plate.

Leno is a calm and collected person. Despite initially antagonizing Kafka for giving up on his dream, he later shows a softer and more caring side towards his friend and his condition and goals. As their bond grows, Leno begins to show his protective side, not only towards Kafka but towards any of his comrades. His resolve in fighting in order to protect his peers brings him to completely ignore Iharu Furuhashi's one-sided rivalrly towards him and still put his safety first.

In battle, Leno is a determined and straightforward person, being a natural thinker on his own. Due to his immense sense of resposibility towards his colleagues and his desire in becoming stronger, an extended usage of his Numbers Weapon can bring Leno to spiral out of control and push himself past his limits in order to be strong enough to save those around him.

Overall Abilities: Leno is a strong troop member with great potential. He is noted by Soshiro Hoshina to have the potential to become a captain,[6] proven when he was able to momentarily stall a kaiju as strong as Kaiju No. 9.[7] Jugo Ogata states that he is a prodigy.[8]

After becoming compatible with Numbers Weapons 6, the Defense Force's most powerful and dangerous weapon made from the corpse of Kaiju No. 6, Leno's combat skills and abilities have drastically improved, allowing him to move much faster and neutralizing a pack of kaiju on his own.[8] However, despite drastically agumenting his fighting prowess, it seems that the suit has a negative influence on Leno's behavior, bringing him to fight out of control in order to defeat his opponent. In fact, due to his immense sense of resposibility, Leno is able to draw a lot of power out of his suit but brings his human body past his limit, to the point of tearing his muscles and breaking his bones just to beat his enemy.[9] 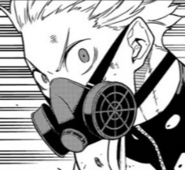