Kaiju No. 8 Wiki
Register
Don't have an account?
Sign In
Advertisement
in: Subpages, Characters, Female,
and 3 more

"Good job holding things down, everyone. Okonogi, abridging request due to emergency. I'm blasting this thing away."
— Mina thanking the Third Division before facing Kaiju No. 10

Mina Ashiro (ミナ, Ashiro Mina) is the Captain of the Third Division of the Defense Force and Kafka Hibino's childhood friend.[1]

Mina is a beautiful young woman with long dark hair styled into a ponytail and decorated with a barrette, sharp orange eyes, and an athletic physique.[1] Under her uniform, she has a little scar on the left side of her upper chest.[3]

Some years ago she sported a bob cut.[4]

Mina usually wears the Defense Force suit, along with a white visor that enables her to increase her vision. In battle, she usually wields firearms and her personal cannon.[5]

Mina as a child

Mina is a serious and determined woman, taking her work and role in the Defense Force very seriously. She holds the promise made years ago to defeat every kaiju to the point that she dedicates all of herself to kaiju fighting. Despite her professional behavior, she remembers Kafka's promise to stand at her side and seem to have a soft spot for him, despite initially being irritated by him for not keeping his promise.

Under her tough exterior, Mina shows her authentic self as a caring person. She does her best to make sure nobody gets injured in a fight and tries her best to keep them safe. She has also shown to be very grateful, praising people for their help whenever possible and needed, and being able to acknowledge someone's worth.

Overall Abilities: Mina is the Captain of the Third Division of the Defense Force and a very powerful combatant. She has neutralized hundreds of kaiju in her career[1] and has displayed the power to easily overpower giant-sized kaiju with few shots.[6] 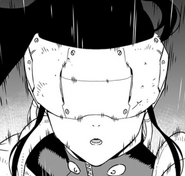 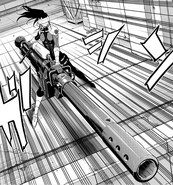