Kaiju No. 8 Wiki
Register
Don't have an account?
Sign In
Advertisement
in: Subpages, Characters, Male,
and 3 more

"You're as good as neutralized."
— Soshiro to Kaiju No. 8

Soshiro Hoshina (, Hoshina Sōshirō)[3] is the Vice-Captain of the Third Division of the Defense Force.[4]

Soshiro is a young man of average height with a skinny muscular build and dark violet short hair in a bob cut style. His red eyes are closed most of the time and he always has a jovial expression on his face,[3] except when serious scenarios made him display an imposing expression with his eyes opened.[5]

Soshiro as a child 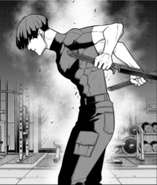 Soshiro is rather laid-back, always having a smile on his face. He seems to enjoy making fun of Kafka Hibino considering him a comic relief.[3] However, he does have some serious moments when he speaks firmly and even open his eyes to emphasize the seriousness of his words.[6]

Soshiro has a great, yet hidden, sense of membership towards the Defense Force, and feels very thankful towards Mina for letting him into her division. His sense of loyalty to his role in the force is so strong that he deep down sees it as his only reason to live.[2]

Despite Soshiro's relaxed and lazy appearance, he is very intelligent and intuitive. He was the only one who correctly deduced Kafka Hibino's identity as Kaiju No. 8 and one of the main reasons he accepted him in the Third Division despite failing the exam was to keep an eye on him.[6]

Overall Abilities: Soshiro is the Vice-Captain of the Third Division of the Defense Force and a very powerful combatant. His combat abilities allowed him to fight on par with Kaiju No. 10.[7][8][9]

While his skill set puts him at a disadvantage against large-sized kaiju, Soshiro's proficiency in defeating small to mid-sized kaiju surpasses that of the Captain of the First Division, Gen Narumi, in the Miniature-Sized Kaiju Combat Category of the Defense Force Neutralization Exercises.[10]

Because Soshiro's low released force in shooting weapons, he prefers close-ranged fighting. He uses his own swordsmanship style known as Hoshina Style Sword-Slay Technique (流刀伐術, Hoshina Ryūtō Ki-jutsu,).[8] His mastery is shown when he brutally slays a kaiju before Kafka's eyes without the latter noticing any movement from him.[11]